The home of Seb Miller and his animals 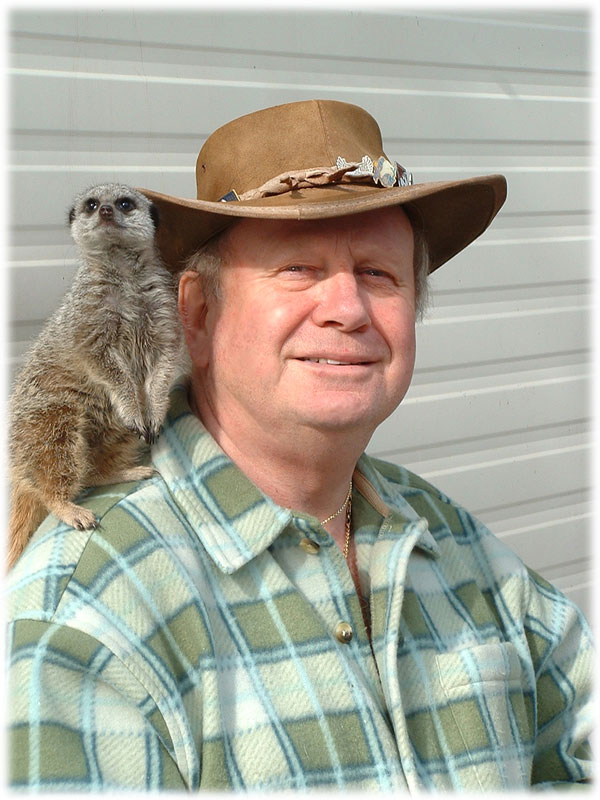 I have had a life long interest in both Flora and Fauna. As a small child I used to collect and watch all kinds of small animals, starting with worms and beetles, and by the age of seven breeding my first white mice, with much encouragement from my mother. Canaries and budgerigars followed, and by the time I was fourteen, I had bred enough budgerigars to purchase my first bushbaby.

By this time I was visiting London Zoo on a regular basis and soon after, Whipsnade. In those days these two zoos had one of the largest collections of animals anywhere in the world. Soon after, I became a fellow of the London Zoological Society and became a regular Sunday visitor, meeting the keepers and going behind the scenes to meet many of the animals up close

On leaving school I worked for a time in forestry, was a farm pupil, and had a go at engineering, but I still had designs on being a zoo keeper.

When I eventually got the offer of a job of junior keeper at London Zoo, it was for the princely sum of £3 per week. I was about to accept the position when I was offered £9 per week to take an office job in the West End of London. At that time London was swinging with coffee bars and rock and roll, all the young had money in their pockets to buy the new style clothes that were then available. I succumbed to temptation and took the office job, and enjoyed the delights of swinging London in the late fifties. I still had my bushbaby ‘Beppo’ who often came out on the train with me, and carried on visiting Zoos.

At nineteen after a few narrow squeaks with motor bikes, I was well into car driving. When denied the family cars, I used to hire one for trips out on the weekends. One such trip with a friend, was to visit The Royal Agricultural Show. On arrival we were looking for something to eat and drink, when an elderly gentleman, sitting under a large umbrella, outside a small white caravan, called us over. He was sipping a large gin and tonic and asked whether we would like a drink. He was a farmer from Kenya, representing the ‘Settlement Board’, encouraging people to settle in Kenya and farm. Having spent the whole day drinking, and hearing exotic stories of hunting lion and elephant in the bush,  and even about ‘happy valley’, although very drunk, we were hooked.

Long negotiations with parents resulted in us both flying to Kenya to attend the Agricultural College in Nakuru. In those days Kenya still had large herds of wild animals, some roaming over large ranches, as well as in the National Parks. Lions and leopard still killed the odd cow, and a puff adder turned up whilst we played a game of cricket. The Rift Valley was, and still is, one of the world’s most beautiful places and like heaven on earth to two young Londoners.

On leaving college I worked as a milk recorder for The Royal Agricultural Society of Kenya, travelling around the whole of Kenya, taking milk samples. Each night I stayed on a different farm or ranch as a guest of the owners. The early morning milking was often finished by 8am, leaving plenty of time for photography, shooting and fishing, before milking again late afternoon.

I returned home to get married and settled into a management job in Brighton. By this time working in a Zoo was out of the question, due to the very poor wages. However the interest in animals was still there, and whilst out pushing the new baby in his pram along the sea front, with a monkey on my shoulder, I met someone who was to be a life long friend, and who was also mad about animals. He had a large collection of small animals, including various monkeys, civets, coatis, skunks, squirrels, parrots and many others. Some were kept in a small zoo, behind a pub with an island in the middle of a lake, where the animals lived. Besides working for a large livestock importer, he also bred several species, and we used to deliver many animals to the new zoos that were starting up at that time.

On moving to the West Country with my job, I started my own collection of animals and started giving displays and talks with them. I did this for many years, when due to  a change in my personal circumstances, I decided to become a volunteer at a local zoo. One of the zoo’s council members was very keen for the volunteers to start doing animal encounters in a much larger way. As many zoos no longer had many ‘handlable’ animals, I built up a collection to be used within the zoo and also used animals from my own collection for visits to outside events on the zoos behalf.

After seven years of this work I was awarded the MBE. During this time I visited a great number of zoos, both in Europe and the United States, to find out which animals they were using for their displays and the various ways in which they were presented. Due to various staff changes in the zoo, resulting in a change of policy, I left and carried on doing the same displays and talks that I had developed over many years, as JUNGLETALK.